Maybe the toughest course we will be playing on the golf trip this summer, The Witch does not disappoint.

The Witch is a 4.5-star course.
The first thing that stands out is the name – The Witch. Golf course names typically include words like dunes, hills, creek and country club. A witch conjures up images of haunted houses, spells and any number of spooky scenarios.

Don't be fooled by the name. The Witch (official site) is as hospitable as any course in the region, casting her spell on the Myrtle Beach golf scene for 20 years, much to the delight of players.

After purchasing the 500 acres The Witch resides on, owner Claude Pardue walked the grounds of the Waccamaw Swamp, surrounded by its haunting black water, cypress trees draped in moss, and more of nature’s critters than you’d care to imagine. Those walks made The Witch moniker appropriate, as anyone who has been in undisturbed swampland can attest, and in one of America’s most competitive golf markets, it separated the course from its peers.

While the name provides some panache, architect Dan Maples’ design supplied a surplus of substance. The result is one of Myrtle Beach’s most unique courses.

The layout features more than a mile of bridges that are needed to traverse the swamp and it provides players with a view of the property’s natural beauty. It’s also home to a surplus of alligators!

The front nine, which plays through the swamp, resides just six feet over sea level at its highest point and is very spread out. The distance between the holes provides privacy and it allowed the course to be built without disturbing the native swampland.
Water and wetlands come are a factor on nearly every hole and the front nine is nearly 400 yards longer than the back.

“I want them to feel the quiet back in the swamps where all they hear are their own golf shots and talking to their buddies, the egrets, wood ducks and wildlife,” Pardue said. “I want them to see and experience that.”

The backside at The Witch is a completely different, though no less interesting, nine.  The property is home to natural sand dunes that provide uncommon, natural elevation change.  There is nearly 42 feet of elevation change at the Witch – none of it man made – and the front nine is the beneficiary.

“You won’t see that anywhere on the coast of North Carolina, South Carolina or Georgia,” Pardue said of the course’s elevation changes. “It looks like you went into the foothills of the Smoky Mountains to build a course.”

The back nine plays 3,002 yards from the white tees and 3,207 from the tips, numbers that aren’t exceedingly long but shouldn’t be taken for granted.

A 4.5-star course, according to Golf Digest’s “Best Places to Play” guide, the Witch is a thinking man’s course with an emphasis on value.

“This is the cheapest 4.5-star golf course you will find anywhere in the Southeastern United States,” Pardue said. “We are very proud of that.”

You will be proud of slaying The Witch, too, if you are up to the task.


Par 3s
The Witch has five par 3s that range in length from 143 to 193 yards from the tips. The lengths are very manageable from the white tees, where most of us play. Water or wetlands offer a significant challenge on both front-side par threes – No. 3 and No. 7.

The third hole is 169 yards from the black tees and  129 from the whites. A forced carry over wetlands and a large bunker on the left must be avoided, but it’s the easiest hole on the opening nine, according to the scorecard.

The seventh hole offers one of the course’s most stunning visuals. A large cypress tree, covered in moss, rises out of a lake that runs in front of the green, which is 185 yards from the back tees. (The cypress tree, while gorgeous, doesn’t come into play).

There are three back nine par 3s, starting with the 193-yard 12th, The Witch’s longest par 3. The 14th hole is the shortest, playing just 142 yards from the black tees. A yawning bunker on the right can be problematic, but players have the opportunity to pick up a stroke on the 14th.

The 17th gets one man’s vote as The Witch’s best par 3. The 17th features 25 feet of natural elevation change, something unheard of along the coast. Playing from an elevated tee box, the hole is 177 yards and has a bunker protecting the right side.  The land’s natural dunes run from right to left so any shot that is pulled likely won’t meet a happy end.

Par 4s
The Witch offers an appealing blend of par 4s. Playing from the white tees, only the sixth hole exceeds 400 yards, measuring 414, and it’s the course’s most difficult, according to head pro Graham Williams.

There are wetlands on the left and a fairway bunker and water on the right off the sixth tee. A long second shot forces players to deal with more sand and water. Most players will be delighted with par or even a bogey.

The shortest par 4 on the course is the 376-yard ninth, but it’s also one of the toughest. Wetlands surround the fairway, forcing a carry off the tee and on the approach. The ninth is a dogleg left and it’s critical that players find the right side of the fairway. With greenery rising out of the wetlands and cypress trees lurking, a poorly positioned drive may not have a path to the green.

The back nine par 4s aren’t as long but do place a premium on accuracy. The easiest par 4 is the 387-yard 16th, a dogleg right that has no water and only one bunker. Throw in a relatively flat green and this is your chance to make a birdie.

The clubhouse looms as the background on the 18th hole at The Witch.
The 18th is a great closing hole, playing 390 yards from the tips and 368 from the white tees. It showcases the land’s rolling topography and the fairway runs from right to left, with the clubhouse serving as a backdrop. The green is full of movement and surrounded by three bunkers. No matter where the flag is, aim for the middle of the green. It’s the best play to make.

Par 5s:
The front nine par 5s are the course’s most difficult holes, according to the scorecard, led by the 599-yard eighth. A dogleg right with the wetlands looming, the eighth will test every part of your game.

The double dogleg fifth isn’t much easier. Water and sand are hazards to be avoided on the left side of a hole that measures 574 yards.

The 11th is 562 yards and straight as an arrow but it’s well bunkered and not exceedingly wide. The scorecard calls it the toughest hole on the backside.

If the Witch has a vulnerable par 5, it’s the 533-yard 13th, though it’s far from easy. The green is reachable in two, but sand and the wetlands are a concern and the green runs downhill towards the wetlands, making it difficult to hold.

Verdict:  The Witch has no houses, no parallel fairways and a memorable piece of property. Maples did an outstanding design job and the result is one of Myrtle Beach’ s best layouts. Given that The Witch is a 4.5-star course, it’s difficult to call it underrated, but it does get occasionally overlooked by the golf cognoscenti. You shouldn’t make the same mistake. The Witch is an outstanding golf course and a great value.

What are your impressions of Myrtle Beach’s favorite Witch?
Golf Holiday is the ultimate source for information on Myrtle Beach golf. 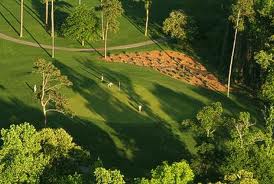 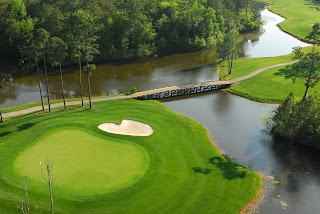