Orange Is The New White In Golf?

There are times when a golf company really steps outside of the box. They’ll do something completely unpredictable, and totally out of character. They might even catch us completely by surprise. Friends and loyal readers, this most certainly IS NOT one of those times.
If you haven’t been working off the assumption that Cobra would eventually release a Rickie Fowler-influenced Orange driver, you haven’t been paying attention. Son, it’s time you get your head in the game. The Orange AMP became a forgone conclusion the day Rickie Fowler signed his name on his Cobra contract.


A History of Limited Editions

When it comes to releasing Limited Edition stuff, this isn’t exactly Cobra’s first rodeo (or snake-charming show). Even before they acquired Cobra, PUMA had basically made a habit of releasing limited edition golf shoes (anyone remember Geoff Olgilvy’s Gold PUMAs from the 2007 Masters?). And while TaylorMade is the company most often associated with white drivers, it was Cobra (all the way back in November of 2010) that actually released the first White Driver (a Limited Edition ZL). Last season, as you may remember, brought us the release of the Limited Edition 48″ Long Tom Raw (the first RAW driver).
So when you consider COBRA’s history (particularly the more recent, post-acquisition history), the growing popularity of Rickie Fowler, the strong association Cobra has developed with the color orange, not to mention the Trademark Cobra filed back in May for orange on the crown of a driver, you’d honestly have to be the wrong side of simple (no offense) not to have seen this bright orange Cobra driver coming.

Before I fall too much in love with the sound of my own keystrokes, let’s take a quick look at the pertinent details of the upcoming Special Edition Orange AMP.
If you find any of this even the slightest bit puzzling, here’s what COBRA has to say about the whys behind the release of an orange driver.

“This Special Edition driver embodies what COBRA Golf is bringing to the game of golf, a desirable package of performance, innovation and style. We are building on the success and strong performance of our current AMP line with an exciting limited edition that will resonate with Rickie’s fans. Like Rickie, we believe the Special Edition Orange AMP Driver will be a huge hit and continue to build desirability for the COBRA brand.” – Bob Philion, President – COBRA PUMA GOLF

How Well Will it Sell?

For the one or two of you who might still be a little confused, let me see if I can’t break this down to the raw pulp, and put it terms you can understand:
While not quite mid-90s Michael Jordan, Rickie is huge right now (and only getting bigger). The “Orange thing” is catching on. It might not be for everyone, but you can be damn sure it resonates with more golfers than not. And these new orange drivers..hold on…you’re going to want to write this down so you don’t forget I said it…

“COBRA-PUMA’s Special Edition Orange AMP drivers are going to sell out faster than front row tickets to a cat fight between Kate Upton and Sophia Vergara”. – GolfSpy T
How do I know people are actually going to pay $500 for an Orange driver? Firstly, people (more specifically golfers) will buy ANYTHING (especially if it’s “Limited”). Secondly, there is a huge market for all things Rickie right now (how else would you explain golfers suddenly descending on their favorite courses dressed like bags of Cheetos?). Finally, there’s some proven history with these type of special releases. Limited Edition ZL…gone. Limited Edition Long Tom Raw…sold out. PING’s Bubba Watson inspired pink G20…sold out before it hit shelves. My guess, the Orange AMP does the same.
Before any of you start moaning and groaning about the price, you need to consider that a standard (non-orange) Cobra AMP driver with a real Diamana Whiteboard shaft retails for $487, $500 for the Special Edition Orange (with a real Orangeboard shaft), seems plenty reasonable to me.

The Party is Still Going at COBRA-PUMA

If there’s one thing I’ve learned from my first 2 trips to the annual PGA Merchandise show it’s that there’s always a party at COBRA-PUMA. Since escaping Titleist’s shadow, the company has quickly established a culture that seamlessly blends serious golf equipment with a laid back, and genuinely fun approach to the industry. It’s actually kinda awesome.
I’m not going to sit here and tell you that I’m going to go full Fowler and dress head to toe in Sunday orange while bagging the new Special Edition AMP Driver, but I might….and even if I don’t, I’m absolutely going to celebrate those who do.
We all talk about growing the game. For that happens, it needs to be fun, and more than anybody else in the industry, COBRA-PUMA would seem to understand that. Even if you don’t like the Orange, you’ve gotta love the spirit of fun that inspired it.


Tell Us What You Think

Would you play the new Orange AMP? What do you think about the new culture at COBRA-PUMA? Let us know!
Posted by Unknown at 10:23 AM No comments:

Posted by Unknown at 9:07 AM No comments:

Beach chairs and sunscreen take center stage in Myrtle Beach during the summer months, but don’t make the mistake of leaving your clubs at home if you are taking a family trip to Grand Strand.

The summer season is an ideal time to play golf in Myrtle Beach. Courses are in great shape and premium tee times are available, so here are five things you need to know about teeing it up along the Grand Strand during the summer months.

1. Great golf at a great price has always been at the heart of the area’s success, but it’s doubly true in the summer months. As the mercury rises, tee time prices drop, providing another reason for you to play your favorite Myrtle Beach golf course one more time!

2. The Grand Strand attracts millions of people for a family vacation, a rite of passage golf contributes to not detracts from. With golf’s most aggressive Kids Play Free program – nearly 50 Myrtle Beach golf courses allow kids 16 and under to play for free - you can introduce your kids to the game at no cost, planting the seeds for family trips for years to come.

3. Summer in the South conjures up images of oppressive heat, but don’t believe the hype. Sure it’s hot in July and August, just like it is everywhere else in the country. Get an early tee and a comfortable round of Myrtle Beach golf awaits. Take full advantage.

4. The heat shouldn’t prevent anyone from playing, but that doesn’t mean the sun isn’t packing plenty of strength. Make sure you lather up with ample sunscreen and wear a hat, it will make the rest of your trip more comfortable.

5.  Summer time ushers in two of the Myrtle Beach golf scene’s best events – the Golf.com World Amateur Handicap Championship and the Summer Family Tournaments. The World Am attracts more than 3,000 players from across the globe to the area to compete for the right to be crowned world champion, while the Summer Family Tournament series can introduce families to competitive golf in a low-stress environment.
Posted by Unknown at 9:54 AM No comments:

Heathland Course at the Legends Resort

The par 71 Heathland course is one of designer Tom Doak’s earliest gems. It takes you back in time to when golf courses were created with an artistic touch and the natural contours of the land dictated the flow of the course.You’ll find holes reminiscent of familiar links, like St.Andrews, and lesser-known courses like Lahinch and Cruden Bay.
Windswept hills and deep-faced bunkers are just a few of the challenges that await each player. Enjoy a taste of the old world in the new world. Golf Digest rated Heathland 4.5 STARS and Golf Magazine rated it in the “Top 10 New Resort Courses in the World".

The par 71 Heathland Course, designed by Tom Doak, is a return to the grand "Old Country" traditions of the game. It has been distinctly molded in the image of the British Isles links courses, with holes reminiscent of familiar links like St. Andrews, and lesser known gems like Lahinch and Cruden Bay. Most of the holes are without high vegetation, providing a visual presentation like no other course in the area. The challenge and difficulty of this course comes primarily from the unobstructed breeze that wafts constantly over the course, and the strategically placed bunkers and lush, deep rough that closely border all fairways. Many of the greenside bunkers are deep and require creative shots to make an escape. Rated one of the "Top 10 New Resort Courses in the World" by GOLF Magazine in 1990, Heathland's design allows players of all ability levels to "step back in time." 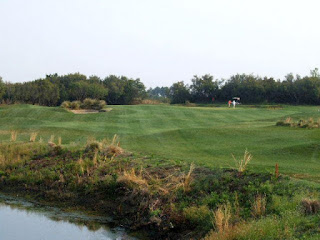 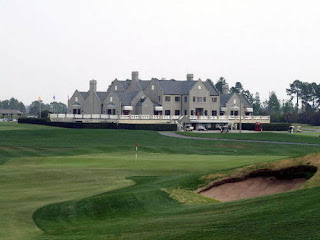 Posted by Unknown at 9:52 AM No comments:

DIVOT Deal Of The Day

DIVOT Deal Of The Day