Thistle is a course we have played a long time ago, when it first opened, and the club house was being built. It's been open a couple years now, and I got to play it last year on the Cip Cup Trip. Thistle has grown in and the club house is amazing!

Thistle's new clubhouse opened in mid-June and is one of the area's finest
The clubhouse is as stunning as it is large. Built with stone, timber beams and stucco and rising from the ground like an ancient Scottish mansion, the new clubhouse at Thistle Golf Club is among the finest in region, if not the country.

Thistle, a 27-hole facility and one of the Grand Strand's best kept secrets, opened its 15,600-square foot clubhouse in mid-June to rave reviews. From the 38-foot ceilings to the collection of rare golf memorabilia, the clubhouse adds to the experience at the Sunset Beach, N.C. property.

"Folks just walk into the pro shop and look at the 38-foot ceiling and go, 'Wow'," said Gene Weldon, Thistle's head pro. "I've heard awesome, unbelievable, and phenomenal (from golfers describing it). It's definitely unique. There is nothing like it I've ever seen."

Beyond the grandeur of the clubhouse, which incorporates the same type of stone used throughout the property, the golf memorabilia is a must-view for players. Named after the original Thistle Golf Club, which was founded in 1815 in Leith, Scotland, the modern-day Thistle has preserved the heritage of its namesake through the memorabilia.

Thistle purchased the Scottish club's original documentation, the official rulebook and a host of other material, including scorecards from the 1820s, at a private auction. Much of that material is on display in the new clubhouse.

"The original scorecard (is one of the coolest items), to see how they actually marked with lines for each stroke and the dash for the fifth stroke, it's just unique," Weldon said. "To read some of the letters from people who wrote applying for the club, it's just unbelievable. It's like calligraphy at its finest; the way they talked back then comes across in the letters. I actually started reading it one afternoon  - you can's touch it under glass because it's so fragile - I read it for about a 1 ½. You just can't stop."

One thing that does occasionally stop the browsing is the clubhouse restaurant, complete with several high definition televisions and a deck that offers panoramic course views.

"We have golfers that finish a round and rather than drive back to their hotel, they will come into our pub and spend a good portion of their afternoon," Weldon said. "Sunday afternoons and Saturday afternoons are a big here. Everybody seems to like standing around having the cold beverage of their choice and enjoying the view."

It is a view that is nearly impossible not to enjoy. 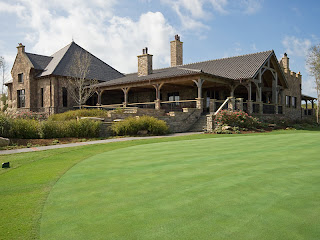