Great greens and a lot of water help make Man O'War a memorable round of golf.
When Man O’War Golf Club was under construction, nothing was left to chance. The subsoil under the greens sites was customized to each location and wind studies were conducted to maximize air flow around the course.

Part of the exhaustive research owner Claude Pardue oversaw revealed that even though the property didn’t have any native water, it did have an unusually high water table, a discovery that led to the construction of one of the most unique Myrtle Beach golf courses.

“We found this property in 1993 and it didn’t have a square inch of water on it,” Pardue said. “But if we dug a four feet deep hole, it was a foot under water, and that gave us the opportunity to build a course around a lake.”

As a result, Pardue built a 107-acre lake that is Man O’War’s centerpiece. Architect Dan Maples then sculpted a one-of-a-kind design from the land.

Man O’War is renowned for its back-to-back island greens on holes 14 and 15. It’s believed to be the only course in the world with consecutive island greens, but they are far from the only memorable holes

The middle part of the course is its strength. Man O’War regulars refer to the par 5 eighth and the par 4 ninth and 10th holes as Amen Corner. It’s a tough but fair stretch.

The ninth - an island hole - is another unique Maples creation. After teeing off on the mainland, golfers take a bridge to the fairway and don’t exit until they cross the bridge coming off the green.

It’s classic Man O’War - unique, scenic but not overly penal as the fairway is the course’s widest.

Water is visible nearly everywhere but it isn’t overwhelming, assuming you don’t allow yourself to be psyched out. The fairways at Man O’War are among the widest on the Myrtle Beach golf scene, and long, forced carries are at a minimum.

The abundance of water also nearly removes two longstanding problems for golfers - woods and pine straw. There are a limited number of trees at Man O’War and the course is mowed from wall-to-wall.

The set of tees players opt to play from is an important consideration. Man O’War has four sets of tees though the vast majority of golfers don’t play from the tips (7,000 yards).

That leaves men with the option of playing the 6,400-yard regular tees or the 5,729-yard senior tees. Most men are loathe to move up, but if you are a 20-handicap, do yourself a favor and play from the senior tees.

The test remains significant and you won’t have to over-swing in an attempt to reach greens.

Speaking of greens, Man O’War’s are among the area’s best and largest.

Pardue spared no expense in preparing his course for great bentgrass greens. When Man O’War was built, he brought in a specialist from the University of Massachusetts to create a unique subsoil for each green, insuring prime growing conditions.

“My idea was to make it as perfect an environment as you could make in Myrtle Beach for bentgrass,” Pardue said.

Part of the plan also included greens that average 10,000-square feet and are as large as 13,000-square feet. The size of the greens gives the course multiple pinning areas which helps reduce wear.

The Verdict: Man O’War is creative, it’s fun and it’s always well maintained. The water might seem intimidating, but it’s abundantly fair. The course is visually appealing and a lot of fun to play. There is always plenty to talk about in the clubhouse after a round at Man O’War. If you don’t believe us, try it!
Posted by Unknown at 11:44 AM No comments: 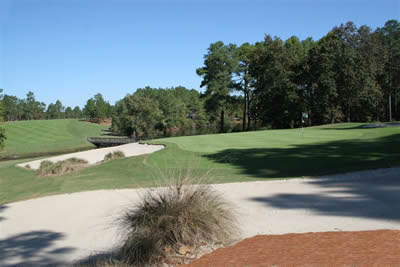 The property that is The Country Club of Whispering Pines has a unique feature…diversity. The East course and its length, combined with the subtle terrain changes, gives “Golf Courses of The Sandhills” another gem in their arsenal of great designs. The East course will make you hit every club in your bag and if you wish to try it from the back tees, has been maintained.
On the other hand, the West Course will remind you of a “northeastern country club” with the elevation changes, towering oak tress that line the fairways and overhanging greens. Tranquil lakes and streams meander through most of the back nine. The West is not as demanding as the East, but requires some “shot making” in order for a golfer to brag upon completion. Smaller greens and less playable rough make tee shots a premium. The legendary Ellis Maples, a Donald Ross prodigy, designed both courses with the ability and talent to create multiple themes on one property.

The CCWP theme involves using the open, hardpan rough, sparsely covered with the native pine straw and “love grass”, to create the elements that appealed to the late, great Donald Ross. Therefore, we claim to be the “most natural 36 holes in The Sandhills”, taking our place on the list of the area’s best. When you combine the courses with our villas, fitness center, pool facility, tennis courts and our fine cuisine…you have a recipe for a fabulous resort. The southern hospitality extended by our professional staff is the final ingredient that makes CCWP a truly great destination. 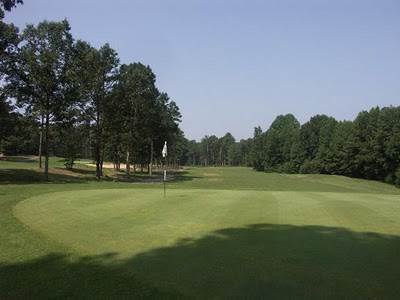 The East and West Courses were both designed by Ellis Maples, who designed the Country Club of North Carolina and other famous courses. For a $500 initiation fee and dues of $250 per month, you basically become a golf member of Whispering Pines, plus 3 other clubs for a total of 6 courses – and all you pay is cart fees. See more on this deal on our Avestra Golf Deal page.
Both WPCC courses are nearly 50 years old, which makes them the most mature courses in the area other than Pinehurst, Pine Needles, Mid Pines and the Southern Pines Country Club. The clubhouse is a dated, but has been renovated inside. Clubhouse bar/grill is better than average, Pro Shop is very good. The East Course is a more challenging in terms of distance, while the West Course has a lot of water – so pick your poison. 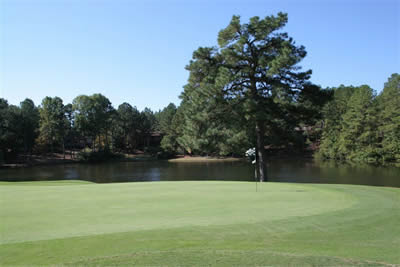 Each of the seven courses installed an ultradwarf Bermuda grass that replicates the best qualities of bentgrass while thriving during the warm summer months in Myrtle Beach.

The most popular of the new ultradwarf grasses are Champion and MiniVerde and they were the grasses of choice for Myrtle Beach courses again this summer.


The Norman and Fazio courses at Barefoot Resort installed Champion Bermuda, as did River Club. The virtues of Champion were on display for a national audience this summer because Atlanta Athletic Club, host of the PGA Championship, uses the grass.

The Avocet Course at Wild Wing, the West Course at Myrtle Beach National, Quail Creek and Lion’s Paw at Ocean Ridge Plantation all installed MiniVerde. A course with MiniVerde has never hosted the major championship but it has received raves from the world’s best golfers as the surface of choice at TPC Sawgrass and East Lake, home of the Tour Championship.

Because the ultradwarf grasses thrive in the summer heat, they take root quickly and provided an outstanding putting surface upon reopening.

“It’s growing in its growing season,” Max Morgan, the director of golf course maintenance for Myrtle Beach National, said. “People like firm fast greens, and they are going to love Myrtle Beach this fall.”
Six of the seven courses that installed new greens have reopened, with the one exception being Quail Creek, which will reopen on October 3. Quail Creek, a Coastal Carolina University owned layout, is doing more extensive course work than the other layouts.

In addition to new greens, Quail Creek is lengthening the 16th hole, redoing its bunkers and moving the second and 18th greens closer to water. Quail Creek is also substantially improving its practice facilities, increasing its putting green to 12,000 square feet, and creating a short-game practice area.
Posted by Unknown at 9:55 AM No comments: