By Doug Ferguson - The Associated Press

ATLANTA -- One clutch shot gave Jim Furyk two big trophies Sunday.
He sat between them Sunday afternoon after his dramatic victory in the rain at East Lake, the crystal trophy for the Tour Championship on his left and the sterling silver FedEx Cup trophy on his right.
Which one meant more?

Jim Furyk hits from the trap to the 18th green during the final round of the Tour Championship on Sunday.
Furyk reached out his right hand and gently tapped the silver cup, which might be more valuable than the $10 million that comes with it.

Clinging to a one-shot lead, in a bunker so deep he could only see the top of the lip, Furyk hit a clean shot and watched it head for the flag. It landed inches from the cup and spun to a stop 21/2feet away for an easy par and a one-shot victory over Luke Donald.

He put his name on a trophy with Tiger Woods and Vijay Singh. He finally won the Tour Championship, giving him three victories in a season for the first time in his career. He stated a strong case - three victories and FedEx Cup champion - as PGA Tour player of the year.

Maybe that explains why his stoic demeanor gave way to a celebration never before seen out of Furyk.
"It just hit me," said Furyk, who closed with an even-par 70. "I was excited and dropped the putter and ... I don't know. I guess at that moment, you're not really responsible for what happens next."

He thrust his fist toward the grandstand with such force that it looked like he heaved his golf ball into the crowd. And he shared a hug with his wife, Tabitha, asking her, "Did I win the bonus?"

Furyk had a pretty good idea when he walked off the 18th tee, and the cheer of the crowd when he tapped in only confirmed it.
It was the kind of finish the PGA Tour had in mind when it created the FedEx Cup four years ago. Six players had a chance to claim the $10 million prize over the final hour at East Lake, from Matt Kuchar as the top seed to Nick Watney all the way down at No. 28.

Then came the final hole.

Donald chipped in for birdie from 100 feet on the 17th hole to keep his hopes alive. Furyk, who had a three-shot lead with three holes to play, made bogey on the 16th and 17th holes and hit his hybrid into a bunker on the 18th. If he made bogey, Furyk and Donald would go back to the 230-yard 18th hole for a sudden-death playoff with $11.35 million riding on the outcome.

Then came a bunker shot that defined a career worth of grit. He was in a bunker nine times at East Lake, and saved par every time.

Donald didn't bother going to the range. He waited in the scoring trailer.

"I didn't feel like going out in the rain and drowning myself even more," Donald said. "So I was just watching the action, seeing if there was a chance I was going to get in a playoff. But Jim made a great up-and-down at the last and deserved the victory."

Furyk finished at 8-under 272 and earned $1.35 million, along with the $10 million bonus, the biggest payoff in golf. He moved to No. 5 in the world ranking.

Furyk was the No. 3 seed when the playoffs began, but was disqualified from the opener when he missed his pro-am time at The Barclays because the battery died in his cell phone, which he used for an alarm. He was No. 11 in the standings going into the Tour Championship, and became the first player out of the top 10 to win the cup.

Turns out he joins Woods as the only FedEx Cup champions to miss the first playoff event - Woods in 2007 because he didn't want to play, Furyk this year because he couldn't. 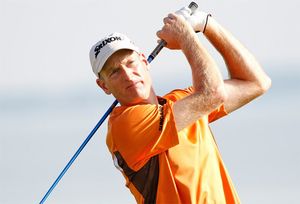