Rising up from the depths of an 80-acre lake, this long-awaited course contains all the drama and challenge that are the hallmark of world-famous architect Dan Maples. The lake at Man O’War winds through the course, defining holes and changing from ally to enemy, as its sparkling beauty becomes a punishing hazard. 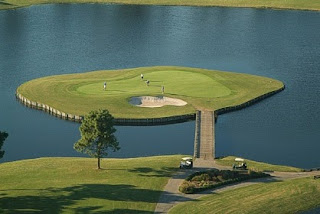 MYRTLE BEACH, S.C. - Perhaps no golf course fits better along the Grand Strand than Man O'War Golf Club, featuring a layout with so much water that golfers may believe they are playing on the beachfront.
Dan Maples certainly had water on his mind in the mid-1990s as he designed this par-72 track. The aqua is an omnipresent threat - its 100 acres within view from every spot on the golf course - but it's not domineering to the point of unfairness to any golfer.

Challengers must tee off over water nine times and hit approaches over water that fronts five greens. Still, it's usually more of a mental challenge than physical.

( 5 reader ratings )
"I think it's the right mix," said Larry Smith, a 7-handicap. "There are times you have to hit over water, but I don't think it's an unfair shot with a long iron. When you do hit over the water, it's usually with a high iron." 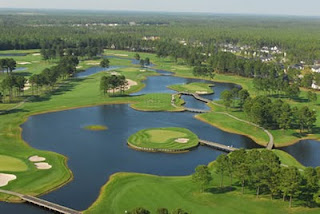 This golf course, about 10 miles from the beach in the community of Carolina Forest, plays nearly 7,000 yards from the tips and measures a shade over 5,000 for the ladies, allowing each individual to suit his or her needs - depending on the individual's comfort with the water.

Man O'War G.C. is a fair golf course with rolling, medium-width fairways, little to no rough and a sparse number of pine trees, giving even high handicappers a chance to thrive.

"It's a fair challenge," said Lou Tripodi, a 16-handicap. "The setup gives me a chance to shoot a decent score. With the sand and the water - even though it doesn't always come into play - it makes you think."
Since most golfers don't have any problem hitting the fairways at Man O'War, the golf course needs a built-in defense mechanism. The Crenshaw Bentgrass greens, in great condition even in mid-January, are large with an average depth of 40.5 yards, but they are undulating. It makes a two-putt difficult if approach shots do not find the proper part of the putting surface. 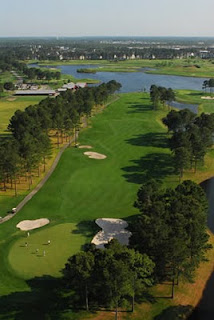 Shallow bunkers that front many of the contoured greens provide a stiff challenge with high lips.
Smith, Tripodi and the other members of their playing group believe that while the depth of the greens makes it easier to find the putting surface, it also challenges each golfer in club selection. For example, the par-3 sixth hole features a 47-foot-deep green, providing a tee shot that varies with every pin placement and passing gust.

The wind, in different ways, affects every hole on this golf course, which is privy to ocean breezes despite its distance from the shoreline. 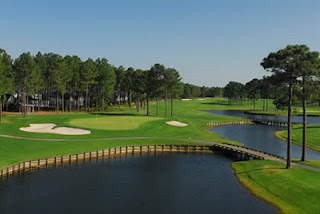 And that beach is never that far from mind; the plentiful water assures that.
For most of the front side, water runs alongside the fairway, but it would take a tee shot well off course to reach it.

Just before the turn, Man O'War Golf Club presents its signature hole, the par-4 ninth. Believed to be the only hole along the Strand that features an island fairway and island green, it invites golfers to first hit over water and then into a green near the tip of the island. 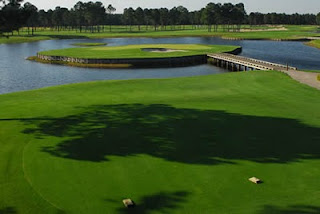 "It's a little intimidating," said Randy Broughton, Man O'War Golf Club's director of golf. "There is ample room to hit, but the longer right you go, the tougher it makes your second shot. There are bunkers down the left that protect the ball from the water but also grab the errant tee shot. With the second shot, it's an open area, and the wind really affects your shot. But you've got to hit into the right part of the green."

Water plays a bigger role on the back side, which opens with tee and approach shots over water on the 10th and 11th holes. Then the par-4 14th and par-3 15th feature island greens. They're tough but manageable.
"A lot women find it intimidating because of the water when they first come," said Vicki Smith, a 6-handicap. "They see all the water and it scares them. But I think, in the long run, if they played this course, it would make them a better golfer. It makes you become aware of the lengths of your clubs. When you're hitting into greens with water, you have to know your lengths. I like this course because of that challenge." 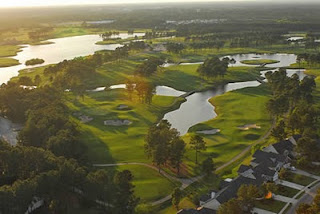 Man O'War Golf Club's not among the flashiest golf courses in Myrtle Beach, but it's certainly a good value. The golf course offers several package deals that provide a quality experience without a big investment. Included are opportunities to play its sister courses, The Witch in Conway and The Wizard, right next door.
Man O'War Golf Club may not challenge low handicappers as much as others, but the water and the wind impact all players. Depending on the conditions, it could play much differently from one day to the next - or from morning to afternoon. Man O'War extends a worthy challenge, if for no other reason than the chance to spend a day around the water - and hopefully not in it. 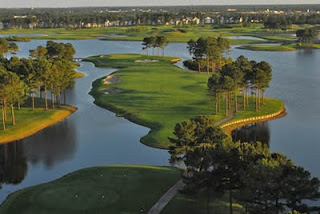 Fittingly, the Man O'War clubhouse, which includes a grill, is suspended above one of the many lakes on the golf course. It also offers a driving range and putting green.

Lessons are available from the PGA Professionals on staff. 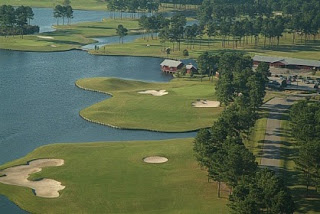